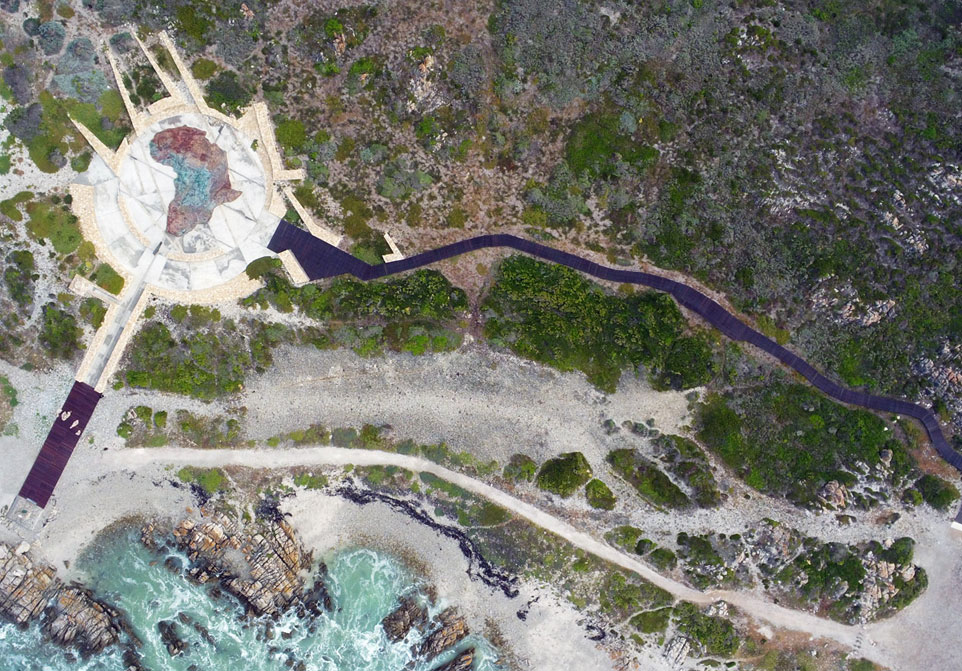 The Southernmost tip of Africa

A structure consisting of a low-walled circle, representing a compass with a map of Africa in the middle, was designed and construct-ed. The circle is 20 to 30 meters in circumference. In the centre the floor surface reflects a map of Africa, aligned with the compass, with an undulating surface on which people can walk. The height of the circular wall is 450mm, creating informal seating and some protection from the wind. A decked pathway leads from the circle to the existing beacon.

The main directions of north, south, east and west, as markers, are made of thick solid steel plates which will rust with time to imitate ship-wrecks.

The structurally necessary expansion joints have been etched every three metres in the substructure to run parallel to the equator and tropics.

The main space is defined by two geo-metrically formal splayed stone walls to the south and a series of skewed stone walls, which follow the angle of the natural stone topography, to the north. These walls will in time merge with the landscape as vegetation takes hold and the weathering processes makes its mark.

The map of Africa as the centerpiece is 18 metres from north to south. The raised profile of the African Continent is hand-sculpted in reinforced concrete and stained with metal powders to achieve the aged oxidised colours and textures that highlight the vegetation and topographic features. Apart from the equator and the tropics, no man-made boundaries or structures were added to reflect the Continent in a unified form and as a vast interconnected eco-system.

The stone beacon: At 34º49’58″S and 20°00’12”E, the stone beacon remains as the original structure marking the official position of the Southernmost Tip of the African Continent. A south-orientated path leads from the circle through a needle-like element (the needle of the compass) towards the existing beacon. From the Southernmost Tip of the Africa map, the southern and largest compass plate aligns the landmark structure to the sea and onwards to the South Pole. Standing on the cairn itself, gazing south, towards the linear meeting point of the Indian and Atlantic oceans, one can turn around and look north – towards the great African Continent: absorbing its greatness, vastness and history…